Submissions pour in for In-House Community Counsels of the Year, 2020 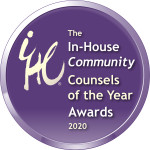 We have received more than 75 submissions from across Asia, the Middle East and South Africa for the In-House Community Counsels of the Year, 2020. (#IHCawards2020)

Competing counsel include teams from:

The aim of the awards is to honour both individual in-house counsel and legal teams that have pursued excellence within their organisations during the past year, and to showcase their achievements and provide inspiration to our community of 21,000 in-house counsel across Asia, Africa and the Middle East. The winning legal teams, and counsel within, will be able to demonstrate a range of achievements, including those in the areas of:

The in-house team nomination period is now closed. Shortlisted nominees will be invited to our annual In-House Community Awards Ceremony & Celebration (date and venue to be confirmed soon!)

We are also pleased to announce this year’s distinguished judges:

Judging Panel for the Counsel & Team of the Year Awards:

Andrew was the 2019 In-House Community Counsel of the Year.

Andrew is a leading entertainment lawyer, specialising in music, sport and esport. He has supported in delivering live events to more than 8 million people, from sponsorship activations through to global football tournaments (and even Papal visits).

During his eight years as General Counsel and Head of Strategy for Flash Entertainment in Abu Dhabi, he and his team received awards (including ‘department of the year’ and ‘general counsel of the year’) from Legal500, Legal Week and the Asia-mena In-House Community. He now heads the legal function at Fnatic, the leading team in esports and a pioneer in the pro gaming space.

Andrew is passionate about learning and development for lawyers, and the critical role which employee engagement plays in managing risk. Fnatic recently became a Law Society authorised training provider, and will shortly commence its first in-house training contract process.

Dr Zhang Xi has been with iCarbonX Group since January 2020. ICarbonX is an unicorn technology & life science company that develops solutions of managing health and digital life.

Dr Zhang Xi graduated from Peking University, School of Law and later, she obtained her LL.M and PhD. in Law from University Tuebingen, Germany.

Kirsty is responsible for strategy, all operations and business development in Asia. She possesses a wealth of experience in this sector, having pioneered alternative legal services in Asia. Prior to this, she served as senior counsel to Diageo, where she built the company’s first legal function for the Greater China region based in Shanghai.

Michelle is a partner of McDermott Will & Emery. She is stationed at the firm’s strategic alliance office, MWE China Law Offices, in Shanghai. Her practice focuses on compliance and regulatory matters, including anti-corruption, anti-unfair competition, anti-monopoly, anti-fraud, and risk management representations. Prior to joining the firm, Michelle was a Principal at Baker & McKenzie Shanghai; the Chief Legal Officer/Vice President of Semiconductor Manufacturing International (Shanghai) Corporation; and an International Attorney for McDonald’s Corporation, headquartered in Illinois. Michelle has been named as one of the Top 30 Attorneys in China and one of the Top 100 Attorneys in the Asia Pacific region (Asian Legal Business); as a leading lawyer in the life sciences sector in China, and a leading Corporate Investigation and Anti-bribery Foreign Counsel in China (Chambers Asia Pacific). She has been lecturing at the renowned Tsing Hua University for its international EMBA programs for several years.

Patrick is Co-Director of the In-House Community, wholly owned by InHouse Community and has twenty-two years of experience working in the legal industry: as Asia Managing Director of Euromoney Institutional Investor, and then as Marketing and Business Development Director for Asia for Shearman & Sterling and White & Case respectively. Patrick joined InHouse Community in 2008. His publishing career began with Haymarket Publishing in 1987. Patrick is a graduate of Leeds University and also holds a Master’s Degree in Far East Area Studies from the School of Oriental & African Studies (London University SOAS). Patrick is included in the 30 people to watch in the business of law in Asia 2019 by Asia Law Portal.

In a seperate category, the Awards will also recognise the region’s Visionary Legal Service Providers (for more information on that click here).

Clinton has been involved with the legal, information-services and technology sectors for the past 20 years, including serving over a decade on Clyde & Co’s regional management teams for the Middle East and Asia Pacific regions. Having intended to spend 2019 focused on a full sabattical break, he has ended up along the way involved with a range of startup (including legaltech) ventures, as well as pursuing a continued interest in client experience and servicing as a strategic differentiator for law and professional services firms.

Jessica is the Director of Financial Crime Legal – APAC at Barclays and is based in Hong Kong. She advises compliance and legal teams, business lines and senior management across the APAC region on financial crime issues including economic sanctions, export controls, anti-money laundering, fraud, and anti-corruption.

Jessica relocated from New York to Hong Kong in 2015. Before joining Barclays in 2018, she was an associate with Freshfields Bruckhaus Deringer and Shearman & Sterling. Jessica clerked for the Honorable Sidney H. Stein, District Judge for the Southern District of New York. She holds a Juris Doctor from the University of Illinois, Master of Arts in Philosophy from Brandeis University, and two Bachelors of Arts degrees in Art History and Political Science from Southern Methodist University. Jessica is a member of the Board of Governors for the American Chamber of Commerce Hong Kong.

Peter Connor helps in-house legal teams innovate and change the way they work to add more value for clients. He does that around the world through his T-shaped In-house LawyerTM and T-shaped Legal TeamTM programs. Peter has lived and worked in Silicon Valley California, Switzerland, England, Hong Kong and Sydney; as European General Counsel and Head of Global Compliance for Citrix Systems and as APAC General Counsel, Head of Legal Shared Services, European General Counsel and Head of European Government Affairs for Sun Microsystems. He also worked for Baker McKenzie in Sydney and Hong Kong. Recently, he lead the development and implementation of KPMG’s New Law business in Australia. Peter is the recipient of the Citrix Design Thinking Hero Award and the Sun Microsystems CEO Leadership Award for his innovative contributions to the business. He is a widely- published author on legal innovation and he regularly speaks at legal conferences around the world.

Nick is the managing editor of Asian-mena Counsel, official publication for the In-House Community. He has been based in Hong Kong since 2000, reporting on law and financial services for FinanceAsia and Euromoney. Since 2015 he has worked as a freelance writer and editor, helping to launch InsuranceAsia News, a trade publication startup covering the Asian insurance industry, and has also written for Nikkei, Thomson Reuters and Tatler, as well as producing thought-leadership and other copy for numerous international financial institutions. In addition to journalism, Nick has also worked in business development for White & Case in Hong Kong.

Sponsors for Counsels of the Year Awards & Celebration 2020: